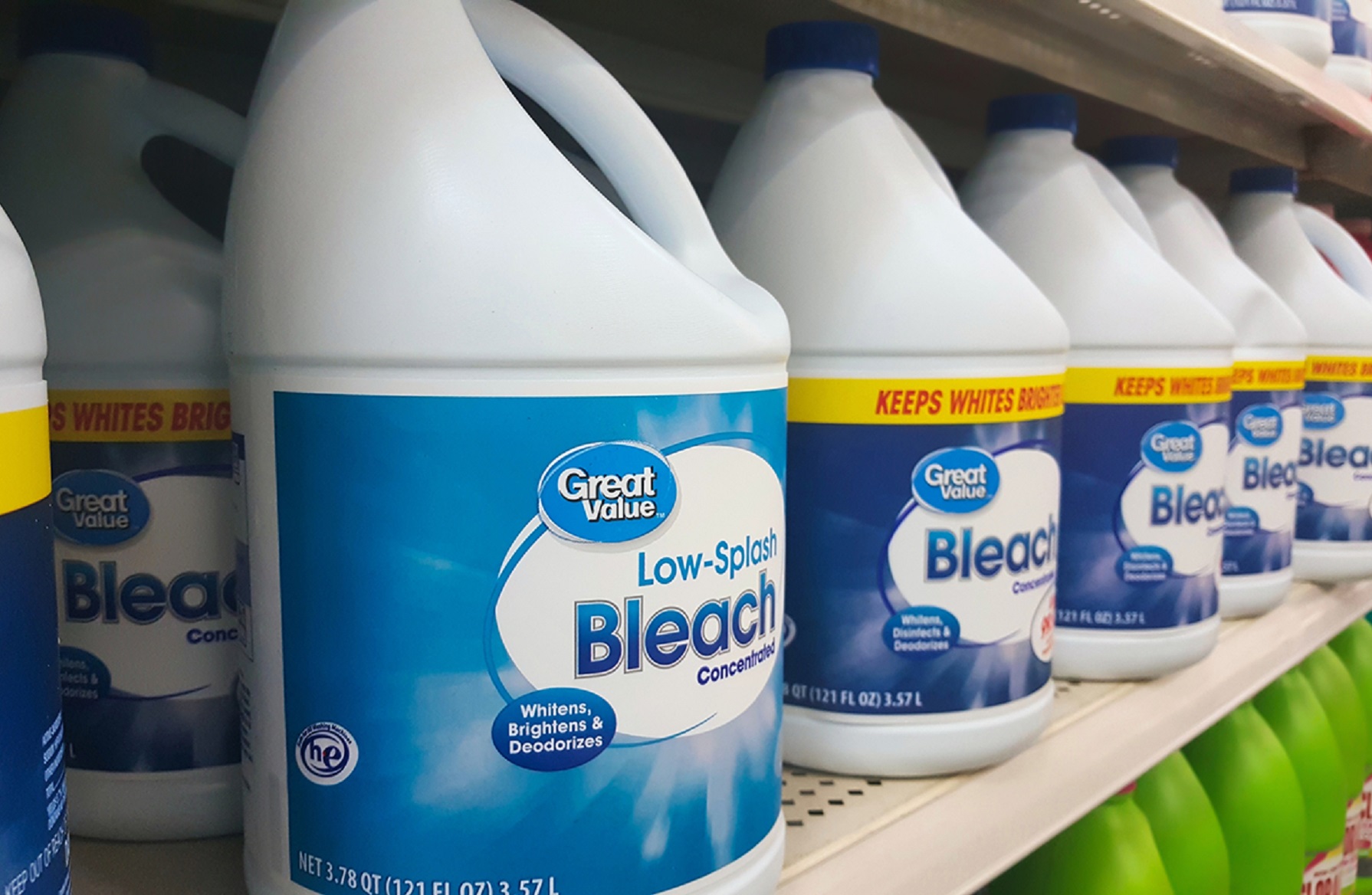 Bleach is a popular choice for killing mold and cleaning moldy surfaces, but does bleach kill mold?

The short answer is yes, bleach does kill mold. It is a common solution for removing mold from surfaces, but it’s not always the best or safest option.

In the not so distant past, anytime someone had a mold problem or mildew in the bathroom, the most common advice was to spray it with bleach and wipe it up. I still see this terrible advice being perpetuated by uneducated mold inspectors and remediators.

Even the Centers for Disease Control (CDC), the Environmental Protection Agency (EPA), and Occupational Safety and Health Administration (OSHA) had advised the use of bleach for mold removal but it appears that these federal agencies are starting to change their tune.

For example, OSHA is no longer recommending the use of bleach for mold removal.

OSHA states that the use of a biocide, such as chlorine bleach, is not recommended as a routine practice during mold remediation, although there may be instances where professional judgment may indicate its use (for example, when immuno-compromised individuals are present).

The EPA also no longer recommends bleach to clean mold in their consumer tutorial, “A brief guide to mold and moisture and your home.” The EPA says that “the use of a chemical or biocide that kills organisms such as mold (chlorine bleach, for example) is not recommended as a routine practice during mold cleanup. ”

The EPA says that “you should scrub mold off hard surfaces with detergent and water, and dry completely. Absorbent or porous materials, such as ceiling tiles and carpet, may have to be thrown away if they become moldy.

Mold can grow on or fill in the empty spaces and crevices of porous materials, so the mold may be difficult or impossible to remove completely.”(1)

One of the biggest problems with bleach is that it can react with other materials and produce toxic byproducts. Even if it doesn’t affect the rest of your home’s contents, it can still cause damage to your health.

Bleach can also be difficult for some people to use. If you have asthma or are sensitive to chlorine dioxide fumes, you should avoid using it on porous materials like wood or tile.

It is a potent chemical that can be very dangerous if it’s not handled correctly.

The main reason is it is made with highly toxic chlorine that can produce gasses such as dioxins that are very harmful to breathe in, soak in through your skin and it also contaminates our environment when it goes down the drains.

Does Not Kill All Molds

As I mentioned above, bleach has been proven to not be an effective cleaner for mold because it does not completely kill all the mold.

A 2006 study by Oregon State University that was commissioned by Forest Products Journal (FPJ) had examined various mold treatments like bleach to eliminate fungi on Douglas-fir (Pseudotsuga menziesii) sapwood lumber heavily colonized with mold and sapstain fungi. The boards were subjected to different washing treatments: wiping with bleach solution, wiping with water, and a no-wash control.

Samples were evaluated visually for changes in mold appearance and then fungi were isolated from the surface of the wood. Replicates from the various wash treatments were further treated with three biocide formulations.

The effect of the mold control treatments on visual appearance and fungal diversity was assessed 1 month after treatment. Increasing bleach concentrations from 2.5 up to 20 percent solution had no effect on the appearance of the wood following the wash treatment, nor did such treatments completely eliminate fungi from the wood surface.”(2)

In addition to it not being effective, it is also dangerous to you and your family’s health.

Chlorine bleach produces toxic fumes that become airborne and can negatively affect yours and your children’s health. For example, bleach creates a chemical compound known as dioxin, which has been known to cause cancer.

The Minnesota Department of Health (MDH) considers “dioxins” to be a group of related compounds that exhibit a similar spectrum of health effects. Dioxins are extremely persistent and once released remain in the environment a very long time.

The MDH says that “animal studies have shown that exposure to dioxins cause a broad range of health effects, with the severity of the effect depending on dose, age, gender, and species.

The observed health effects include changes in the level or activity of enzymes and hormones, organs weight changes, altered reproduction and normal development of offspring, and immune dysfunction. High doses cause a failure of animals to grow, called wasting disease, which is fatal.

Low doses cause small changes in cell function-such as changes in levels of thyroid hormones or enzyme activity. Doses to the fetus or young animal may also delay or harm development of tissues and the nervous system.

The MDH also said that “several studies suggest that workers exposed to high levels of 2,3,7,8-TCDD over many years have an increased risk of developing cancer. The relationship of apparent increases in cancer in these occupationally exposed populations to calculations of general population risk remains uncertain.

Animal studies have conclusively shown that 2,3,7,8-TCDD is a carcinogen capable of increasing the incidence of tumors at multiple sites.”(3)

In 2012, the Association of Occupational and Environmental Clinics (AOEC), named bleach an asthmagen, which means it can cause asthma, not just trigger an asthma attack in someone who is already asthmatic Studies back this up and have shown that exposure to bleach is associated with respiratory irritation and respiratory problems, such as bronchitis and asthma in both adults and children.(4)

A 2015 study found that even passive exposure to cleaning bleach in the home may have adverse effects on school-age children’s health by increasing the risk of respiratory and other infections.(5)

Researchers also had shown in a 2006 study that asthma symptoms in domestic cleaning women are associated with exposure to bleach and possibly other irritant agents.

The public health impact of the use of irritant cleaning products could be widespread since the use of these products is common both in the workplace and at home.(6)

To remove mold, a product must be able to kill it and also be safe for you. That’s why we don’t recommend using bleach for mold removal.

Instead, try one of these alternatives for mold removal that will actually kill mold at its root and help prevent it from coming back.

* 3-12% Hydrogen Peroxide – Hydrogen peroxide is a natural disinfectant that is very effective at killing mold and its spores. It is also safe to use on any surface and it breaks down into water and oxygen after application.

If you are looking for a natural treatment for cleaning mold and mildew, tea tree oil is an excellent option. Mix one teaspoon of tea tree oil with two cups of water in a large spray bottle. Spray it on all surfaces that have mold or mildew, then scrub

Wear gloves, long sleeves and eye protection when cleaning to protect your skin and eyes from chemicals and dead mold spores that may cause allergic reactions in some people.

Open any doors and windows to allow fresh air into the room while you’re working to prevent breathing spores and fumes from cleaners used for mold removal.

Fill a spray bottle with hydrogen peroxide (3% to 12% concentration)

Spray the moldy area with the hydrogen peroxide, and let sit for 10 minutes. Scrub the area with a brush. Wipe down the area when you’re done with a damp cloth.

Based on the research above, it should be clear to you that bleach is simply not an effective mold cleaner or remover. Not only is it not effective, it is dangerous to you and your family’s health.

The facts are that people who use bleach in their homes are poisoning themselves, their families and the world, so don’t let that be you!