Mold Rage: How toxic mold can cause you to become crazy and schizophrenic 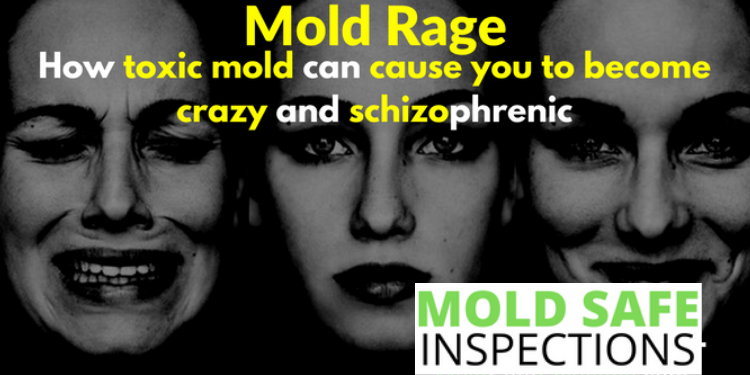 Many people who have been exposed to toxic mold complain of behavioral and neurological problems like what has been called mold rage, psychosis, aggressive and erratic behavior, and depression.

I had previously written in my article, Mold Can Cause Depression that researchers have connected depression with people who lived in water-damaged and moldy homes.

The reason why mold causes people to act abnormally is because some molds produce mycotoxins which can be very neurotoxic.

What this means is that the toxins produced by some molds are neurotoxins that are poisonous or destructive to brain and nerve tissue, which causes a condition known as neurotoxicity.

The term neurotoxicity refers to damage to the brain or peripheral nervous system caused by exposure to a man-made poison or in this case, a mold poison.

When mold mycotoxins cause neurotoxicity, it is called myconeurotoxicity, which refers to any adverse effects of exposure to mycotoxins or byproducts of primary and secondary mold metabolism, including volatile organic compounds (VOCs) on the structural or functional integrity of the developing or adult nervous system.

Neuromycotoxic effects may involve a spectrum of biochemical, morphological, behavioral, and physiological abnormalities whose onset can vary from immediate to delayed actions, following exposure to a mycotoxins. The duration of effects may be transient, or persistent, and result in disability in some individuals, while some may have life-threatening consequences.(1)

These mold toxins are so dangerous that they are used by militaries around the world as bio-terror weapons!

Dr. Janette Hope of the American Academy of Environmental Medicine has said that mycotoxins have been used as biological warfare agents such as Trichothecenes, which are produced by the molds Stachybotrys, Fusarium, and Myrothecium.

It is well known that mental illnesses are associated with nervous system disorders, so it only makes sense that some people who have a toxic mold illness and or fungal infection suffer from mental issues due to the toxic nature of the molds they come in contact with.

It is not the people who are crazy. It is the mold mycotoxins making them crazy!

This is thoroughly backed by science.

For example, in a 2003 study by the Environmental Health Center-Dallas titled, “Effects of toxic exposure to molds and mycotoxins in building-related illnesses,” 100 participants were examined in an effort to uncover how toxic mold exposure can affect the nervous system and brain.

What they found was that after mold exposure, nervous system challenges were observed in 100% of the patients tested.(3)

Other studies have found that human exposure to molds, mycotoxins, and water-damaged buildings can cause neurologic and neuropsychiatric signs and symptoms.

Many of these clinical features can partly mimic or be similar to classic neurologic disorders including pain syndromes, movement disorders, delirium, dementia, and disorders of balance and coordination.(4)

Researchers in a 2003 study assessed the psychological, neuropsychological, and electrocortical effects of human exposure to mixed colonies of toxigenic molds.

The researchers found that the patient’s sleep could be disturbed by mycotoxins and that they had exerted some rigorous effects on the circadian rhythmic processes resulting in sleep deprivation.

A more recent study by the Johns Hopkins University School of Medicine, published in Science Direct, had shown that yeast infection caused by the mold (fungus) candida has been linked to people with mental illness.

Professor Emily Severance, of the Johns Hopkins University School of Medicine said that most Candida infections can be treated in their early stages, and clinicians should make it a point to look out for these infections in their patients with mental illness. (7)

It is well known in the field of mycology that many of the same human illnesses and diseases caused by fungi can be found in the animal kingdom. For example, there are five mycotoxins found in concentrates or roughages which have been shown to cause neurologic disease in livestock. Fumonisin B, is produced by Fusarium moniliform and causes leukoencephalomalacia in horses.(8)

Studies have also shown that the mold known as aspergillus, which is commonly found both indoors and outdoors all over the globe, has been linked to mycotoxicosis in ruminants is often associated with neurotoxic symptoms in large animals such as cattle.

When sudden neurotoxic symptoms prevailed in several herds of cattle in Belgium in summer 1997, researchers found the presence of toxicogenic molds and mycotoxins in their feed.

The described verruculogen B, as the most toxic representative of the group of indol-derivatives inducing tremors in animals.

Neurological effects caused by tremorgenic mycotoxins are temporary and affected animals usually regain normal posture and movement within a short-time after removal of the contaminated material.

Mortality may occur from misadventure if, for example, affected animals fall over cliffs, into ditches or ponds.

When post-mortem investigations of the numerous deaths revealed neuronal lesions, circumstantial evidence pointed towards Aspergillus clavatus, as the main cause of the degenerative neurotoxicosis.”(9)

Last but not least, mold mycotoxins can interfere with vitamin B12 function and cause B12 deficiencies.

This is serious because a deficiency in this crucial vitamin can result in severe health problems such as neurological diseases, depression, anxiety, paranoia, memory loss, fatigue, weakness, vision problems and much more.

This may explain why so many people who have been exposed to mold experience many of these symptoms.

Unfortunately because of misinformation and propaganda mainly perpetrated by the insurance industry, paid defense experts with agendas, and law firms who work in toxic mold defense cases, this science is being ignored, hidden, manipulated and even called quack science.

All in the name of protecting corporate interests and money!

But the facts are that there are many mycology experts and people without an agenda and who do not work for insurance firms and or as defense experts that have proven without a doubt that toxic mold and its mycotoxins can cause serious illnesses and diseases to our central nervous systems and brains and even death.

People who have been exposed to toxic mold and have neurological issues are not crazy.

It is the mold mycotoxins making them crazy!

I will leave you with the conclusion of the researchers in the study titled, The validity of the environmental neurotoxic effects of toxigenic molds and mycotoxins.

“The validity of the health effects of chronic toxigenic mold and mycotoxin exposures has been reviewed.

The exposures to mixed molds and mycotoxins are confirmed to lead to CNS and the immune system, have pulmonary, and allergic effects preceded by inflammatory processes.

Subsequently, these events lead to the observed neurobehavioral abnormalities in exposed individuals.

In the light of recent compelling pieces of evidence available in peer-reviewed literature and the emergence of the science of nanotoxicology, it is almost imperative that most of the controversies concerning the validity of the adverse health effects of chronic environmental toxigenic and mycotoxic exposures can at least in parts, be resolved.”

If you need assistance with a professional mold inspection, mold remediation, or a professional consultation, please call or text us at 760-818-6830.