Mold Safe Inspections offers Environmental Relative Moldiness Index (ERMI) testing in Southern California. We have found that it can be a key weapon in the battle to keep yourself and others safe against mold illnesses.

The ERMI has been developed by the Environmental Protection Agency (EPA) in order to indicate the presence of mold in a home or business.

Introduced by the EPA’s Office of Research and Development, the ERMI is hardly a new tool. Upwards of 10 years of research have already been put into the ERMI, and the system is continuously being refined (3). This means that the accuracy and relevance of the index will only increase as time goes on.

There are currently 36 different species of mold that can be analyzed using the index. It is not only the species of mold present that matters, however, but also the amount of mold that is found. Both are considered when determining whether an area is safe for humans to reside.

Although the ERMI is considered a research tool, it is shaking the foundation of mold-related knowledge. And it all works with the help of dust.

Dust is a vital component of the ERMI system. Mold can settle on dust particles over time. Unlike air samples, which are only able to test for mold in the air at a specific point in time, dust samples give a historical account of mold (1). This means you can get a complete idea of the mold that is present in an area rather than just a mold particle count in the air at a given second.

Here’s how it works:

Now, something has to be done with the mold particles. Using a method called “mold specific quantitative polymerase chain reaction” (MSQPCR), the actual DNA from the different molds in the sample can be extracted and analyzed (2). 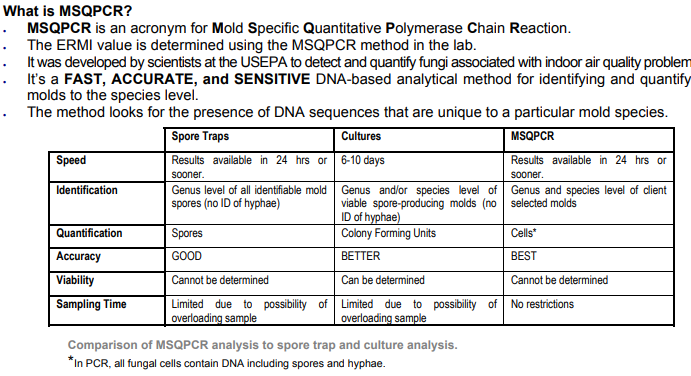 To analyze the mold, its DNA is compared to the 36 species of mold indicated by the ERMI. The types of mold found are taken into consideration as well as the mold count found. This information is compared to a set of values found on the ERMI, which indicate whether or not a place is safe for humans. The molds are categorized into two groups.

The values on the ERMI are essentially a scale that ranges from -10 to 20 (lowest to highest). This is done in order to quantify if the area is safe. If the analyzed sample is found to be on the lower end of the scale, it is safe for humans to be around. If, on the other hand, a sample is found to be higher on the scale, the area is increasingly unsafe. For example, an area with a value of 14 would be in the top 25% of mold burdened buildings and would be rendered unsafe (4).

Why should this matter to you?

There is a direct correlation between buildings that have greater amounts of mold and higher incidences of illness. Numerous studies have been done and it is well established that higher values on the ERMI scale indicate higher risks for contracting mold illnesses.

A study conducted in the past and reported in 2011 observed 176 children from birth to the age of 7. The experiment took account of the condition of the children’s breathing in, as well as the mold found in each home in which they live. The study found that “Children living in a high ERMI value home at 1 year of age had more than twice the risk of developing asthma than those in low ERMI value homes” (5).

The study lasted for seven years, but all it took was a single year using the ERMI for researchers to find correlation. There had been no coincidence, children at age one had double the chance of contracting a mold illness if they lived in a home with high levels of mold. This fact has not been known by the general public until recently, but it is groundbreaking nonetheless.

Unfortunately for the children that were observed for the study, they could not do anything about their living conditions. They were completely helpless to the mold that was affecting their health in the most critical developmental years of their lives.

All over the world, people are in that same position of not knowing about mold that is in their homes; mold that is wreaking havoc on their health and their lives. Some people do have a choice, though. And as time goes on, we have more and more opportunities to be conscious of our health and the things that are affecting our health.

I hope that I have been able to illuminate you on the importance of testing for mold inside buildings where you spend most of your time. As the ERMI becomes increasingly available, I recommend that you get your home and place of work tested as soon as possible.

Your health will thank you for it.

4. Development of ERMI for US Homes

5. Higher ERMI Values Measured in Homes of Those With Asthma