Why you should take zinc for mold illness 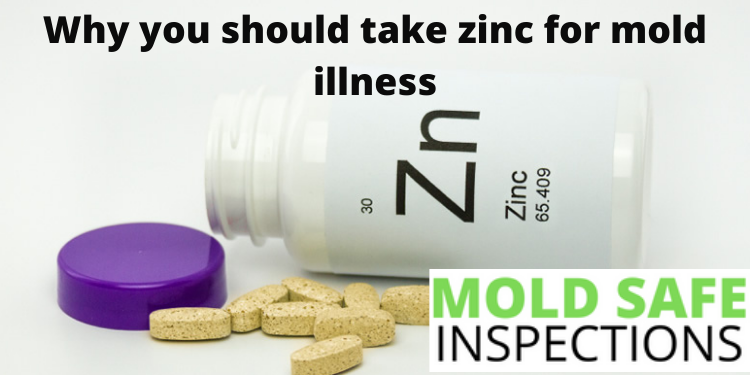 In my last article, Zinc Deficiencies: How toxic mold steals zinc from your body, I explained how pathogenic molds (fungi) like candida and aspergillus steal our zinc (Zn) which often leads to a zinc deficiency. When someone is deficient in any vitamin and or mineral, the simple solution for the problem is to supplement.

Just like when you are thirsty. This means you are deficient in water (H20) and we all know the cure for this H20 deficiency is by drinking water.

The good news is that supplementation of zinc has been shown to have many health benefits and also antifungal properties. It has been proven in many studies to help prevent blindness, cure common colds, reduce inflammation, stop diarrhea and decrease oxidative stress to name a few. It also can kill molds and helps to prohibit their growth.

Let me share with you the great science behind this little known, but extremely powerful and essential chemical element.

A 2009 study put forth research showing how zinc therapy has been very successful and life-saving measure in patients with acrodermatitis enteropathica and Wilson’s disease. The researchers had shown how beneficial therapeutic responses of zinc supplementation have been observed in acute diarrhea in children, chronic hepatitis C, shigellosis, leprosy, leishmaniasis, and common cold.

Zinc supplementation was effective in decreasing incidences of infection in elderly and patients with sickle cell disease.

Zinc is an intracellular signaling molecule in monocytes, dendritic cells, and macrophages and it plays an important role in cell-mediated immune functions and oxidative stress. Zinc is also an anti-inflammatory agent.”

They concluded, “These unique properties of zinc may have significant therapeutic benefits in several diseases in humans.”(1)

WOW! That is a lot of potential benefits for people who suffer from these illnesses and diseases. But that was just one study and in order to be convinced, I need more data and let me tell you, there is a lot of studies that say basically the same exact thing.

An extensive 2013 study had shown how zinc has been very successfully used as a therapeutic modality for the management of acute diarrhea in children, Wilson’s disease, the common cold and for the prevention of blindness in patients with age-related dry type of macular degeneration and is very effective in decreasing the incidence of infection in the elderly. Zinc not only modulates cell-mediated immunity but is also an antioxidant and anti-inflammatory agent.

In this study, researchers detail several studies of various diseases that improved with zinc supplementation. For example, they show how a zinc can help people with diabetes, Alzheimer’s, atherosclerosis, macular degeneration, Wilson’s disease, and the common cold.

They list a study where they recruited 50 volunteers within 24 hours of common cold symptoms. Participants took 1 lozenge containing 13.3 mg of zinc (as zinc acetate) or placebo every 2–3 h while awake. The subjective scores of clinical symptoms were recorded daily.

The mean changes between zinc and placebo groups (before vs after therapy) showed significant differences in soluble IL-1-ra (P = 0.033) and soluble ICAM-1 level (P = 0.04). Both decreased in the zinc group, and the mean changes in zinc and placebo group (before vs after therapy) showed a significant difference (P < 0.001).

The researchers said, “Our results suggest that common cold viruses increase oxidative stress, which activates macrophages and monocytes and results in increased production of both the inflammatory cytokines and the anti-inflammatory product soluble IL-1ra; thus, a decrease in soluble IL-1ra in the zinc group suggests that zinc decreased the activation of monocytes and macrophages by decreasing oxidative stress.

“We conclude that zinc acetate lozenges given within 24 h of the onset of a common cold in proper doses are very effective in decreasing the duration and severity of the common cold. We propose that the beneficial effects seen in the zinc group were due to the antioxidant and anti-inflammatory effects of zinc.”

Many people who have been exposed to mold, have drunk alcohol and or who have eaten poorly all their lives suffer from liver problems. A 2012 study zinc may help many types of liver disease, including alcoholic liver disease (ALD) and viral liver disease.

The researchers concluded, “Clinical trials in human liver disease are limited in size and quality, but it is clear that zinc supplementation reverses clinical signs of zinc deficiency in patients with liver disease.

Some studies suggest improvement in liver function in both ALD and hepatitis C following zinc supplementation, and 1 study suggested improved fibrosis markers in hepatitis C patients. The dose of zinc used for the treatment of liver disease is usually 50 mg of elemental zinc taken with a meal to decrease the potential side effect of nausea.”(3)

A 2016 study had shown how zinc deficiency has an association with the risk of asthma. Researchers evaluated the efficacy of zinc supplementation in reducing the severity of childhood asthma exacerbation in 42 children who receive either zinc bis-glycinate (30 mg elemental zinc/day) or a placebo in adjuvant to the standard treatment.

They concluded, “zinc supplementation as the adjuvant therapy to the standard treatment during asthma exacerbation resulted in rapid lessening of severity.”(4)

As I mentioned in the beginning of the article, zinc also has antifungal properties. For example, billions of people around suffer from a fungal skin condition called dandruff.

A 2011 study had shown the antifungal mechanism of action of zinc pyrithione(ZPT), which is the active ingredient most commonly used in many antidandruff treatments. The researchers used modern systems biology approaches to show that ZPT inhibits fungal growth through increased cellular levels of copper, damaging iron-sulphur clusters of proteins essential for fungal metabolism.(5)

What this means is that by taking zinc, this, in turn, increased the amount of copper in their cells and damaged iron-sulphur clusters of proteins which made for an inhospitable environment for the molds (fungi). This information is key in understanding how zinc works in our bodies and how it can also kill molds.

Researchers in a 2013 study detailed the antifungal properties of Zinc-compounds against evaluated against the toxigenic mold strains of Fusarium graminearum, Penicillium citrinum and Aspergillus flavus. The researchers noted that (ZnO-NPs), zinc oxide (ZnO) and zinc perchlorate (Zn(ClO4)2) completely inhibited the fungal growth and their ability to produce mycotoxins. The conidia production of all fungi also was reduced after the treatment with Zn-compounds.

The researchers concluded that alterations occurred in the treated fungi showing hyphae damage. The treatments led to cell death and ROS production observed in the fungi hyphae. ZnSO4 and Zn(ClO4)2 were the compounds that showed better results as antifungal, presenting antimycotoxin activity and caused alterations in the fungi cell structure.(6)

The research is crystal clear, zinc supplementation helps and even cures many illnesses and diseases. As I mentioned in the beginning of the article, zinc also has antifungal properties which I will explain in my next article.

My family takes it and we are seeing the health benefits. Maybe you should consider doing the same…

1. Impact of the discovery of human zinc deficiency on health

2. Discovery of Human Zinc Deficiency: Its Impact on Human Health and Disease